ABSTRACT
Despite the fact that open water sports events have widely increased over the last years, in some Countries specific rules for safety assistance are not yet well codified.
A scientific approach to this field might take in account both the examination of technical data and medical considerations about the type of expected pathologies.
On the basis of specific literature and our own experience, we suggest an integrated operative model aimed to optimize either the rescue phase or the health care.
Our model starts with the separate analysis of the two main scenarios, respectively consisting of athletes at sea and ground-based population, and gives detailed indications of the procedures to be taken before the race as well as during the race itself.

A – BACKGROUND
The sports  events in aquatic environment and in particular the open water swimming competitions   (OWSC), both amateur and competitive, have significantly increased in recent years. This may be related to the   rising of some philosophical and cultural concepts of our own time, among them:

OWSC are not unavoidable events and therefore subject to unforeseen or difficult to control risks, as occurs in the case of mass aggregations related to ordinary life (airports, railway stations, vehicular traffic, commuting, etc.). On the contrary, they are the result of specific will as well as programming.
Thus, in such conditions, adverse event may be statistically predictable and must be reasonably preventable.
Generally, OWSC scheduling take well into consideration the sporting aspects, the enhancement of athletes and competitions, the side events, even the cultural context. The problem of safety, perhaps because of a “historic drift” is not always faced, also in the planning, with proper attention.
The two key aspects of safety, rescue and health care, seem to still have in the logic of the organizers a secondary consideration:  probably it is due to the mistaken belief that “nothing ever happens”.
Consequently, economic investments allocated to security represent a little part of budget and often actually and unjustifiably insufficient. On the other hand, despite praiseworthy efforts by certain Rescue Agencies, notably in the field of OWSC, specific and shared guidelines, also useful as a legal reference,  are still lacking.

B – AIM OF THE WORK
In light of the above expressed the Authors propose to analyze the various OWSC components and to set up a SAFETY PLAN model in which the two essential components, water rescue and medical aid in water and on land, can integrate and interact in a orderly flow of actions aimed at:

C – LITERATURE ANALYSIS AND EXISTING EXPERIENCES
The documentation about the safety related to the OWSC is quite varied and generally not governed by institutional public entities.
In Italy safety is configured, in most cases, as an annex to the various calls for tenders, managed by the company organizing the event and assigned to a specific private Agencies (SNS, FIN) or to the local  Emergency Territorial Service. It follows a management characterized by large discrepancies in terms of type and number of rescuers, logistic location, employed means, institutional health reference.
Therefore,  a national registry that can fully list and scientifically analyze the adverse outcomes is lacking. As consequence a protocol  to identify and then standardize the minimum essential requirements for safety is not available.
In Europe and US the technical / sanitary approach to OWSC is generally more organized.
We would like to mention, among others, three independent agencies (USA ,UK and Australia),  dedicated to “open water  swimming”,  which publish precise rules on the health assessment of athletes and in which are also included safety references to be considered during races:

D –  HEALT ASPECT:  PATHOLOGICAL FEATURES AND PREDICTABLE RISKS
The complex of pathological situations and therefore the type of morbidity / mortality may differ depending on the characteristics of the considered population.
The sample of subjects that generally compose the complex of spectators and supporters of a particular event is, in principle, wholly comparable to the general population: the expected health events will then be consistent with the set of the most common diseases, declined by age , sex, health status etc.
Analysis of the specific diseases of the athletes in the race is yet more interesting.
Even considering that the starting line will present a sample of subjects by definition young and in good health, some risk factors can give rise, during the race and then under stress, the occurrence of various diseases, some of which severe or life-threatening.
These factors can be shortly summarized as listed:

As  well known from Literature, the worldwide  incidence of Sudden Unexplained Deaths (SUD) is about 100/100.000 /year for over 35 y population and 1.5-6.5/100.000/year for young people, under 35 y. It can be estimated that about 33 million subjects every year die because of SUD (4)
The etiology of youth-related SUD can be divided into extracardiac ( approximately 1/3) and cardiac causes.
Among the latter ones the most representative syndrome are:

The common data to these diseases is the fact that they depend from gene (transmittable) mutations, able to modify the synthesis of proteins deputed to the correct formation and function of cellular “strategic”, structures , like sarcomeres, cellular ion channels, or finally some coronary structures.
In some cases early diagnosis (and therefore proper prevention) is possible, not only through genetic mapping           with evidence of compromised gene, but also by using standard and non-invasive investigations (ECG, cardiac US).
Any case however, the level of attention and therefore the provision of safety systems must be high and     should include the possibility, even though statistically remote, that this type of event could happen in the race.

Moreover, it is important to consider the morbidity / mortality from not athletes-related conditions, which instead are linked to the competition area or to the local conditions.
An excessive number of subjects for track area, for example, may increase the possibility and the type of traumatic pathology by contact.
Adverse weather conditions could instead increase the degree of cardiorespiratory and muscular effort, with corresponding increases in several “fatigue syndromes”.
Finally, a critical change in local conditions of temperature / humidity / sunshine / rain could cause the appearance of pathologies to them correlated.

E – THE OWSC SCENARIOS
Usually  an OWSC,  from the point of view of the samples and the type of involved subject,  consists of three categories of the population:

Moreover, from a logistic point of view, we can identify two scenarios, separated by a line of contact:

Specific and pre-existing calculations for the risks associated with the above listed variables are not readily apparent in Literature. In TABLE II we therefore report a stratification derived from our own experience, referred to three last years of assistance to the “Swim the Island” event (about 2,000 athletes per year), held in Liguria Italy.

Variables to be considered:

Many models and algorithms that analyze the various components of mass-aggregation events and provide predictive risk estimates exist in this regard in Literature.
We mention. among others. the Hartman model (5) and the MGERS model (6).
Both can be a useful reference for scenario 2 planning.
Anyway continuous  monitoring , in order to make efficient and effective the rescue-aid chain, is mandatory. This is done by:
– Early detection of dangerous situations;
– Remove the victim from the hazardous conditions;
– Diagnosis of the type of health problem and consequent therapeutic management;
– Restoration and maintenance of the vital conditions in the most severe cases;
– Conveying, where necessary, to advanced rescue unit.

F – THE SAFETY PLAN (SP)
The Safety plan is formed by integration of two elements, intrinsically and mutually linked:

The SP should indicate and explain, incrementally depending on the risk parameters derived from the analysis of the scenarios’ characteristics, the presence, distribution and number of vehicles, stations and professionals. In particular we can distinguish:

After the predictable risks analysis, medical equipments must be carefully arranged in the considered scenarios (see par E). They in summary consist of:

The RSP and HSP managers will agree on the disposition of these equipments  on board the rescue water craft as well as on land.

F4. Responsibility and tasks
Head of RSP is a professional certified for this role (saving in aquatic environment), belonging to an institutionally listed Agency. The head of the RSP is also general manager of whole SP.
Head of  HSP is a medical doctor with adequate experience of water-related events.
These two professionals will jointly analyze characteristics and risks inherent in scenarios 1 and 2, then process and share, depending on the problems found and the level of overall risk, the safety plan.
The head of RSP is the holder of all decisions on setting of the emergency services in the water, crews‘ composition, rescuers / doctors boarding,  crafts’ location and operative area , type of patrolling and communication channels.
The head of HSP decides the point of first aid and ambulance services location, health care facilities, doctors and nurses placement and operating procedures.
Task of HSP is also alerting the territorially competent  emergency service at the beginning and end of the race.

Since the two described scenarios, while maintaining each specific individuality,  substantially are bordering  by a sort of ground-water facing,  it is very important, in order to optimize the flow of victims, that the head of HSP  arranges:

The logistic evaluation and the conveying pathways accomplishment depend from features of both front-water and rear area, which could be different form case to case.
In Figure 2 you can see the layout of the critical areas during  an open water  3 nautical miles race, with starting from the ground and for a total number of 250 athletes.

The flow of rescue and health actions, according to our purposes, is shown in the following diagram: 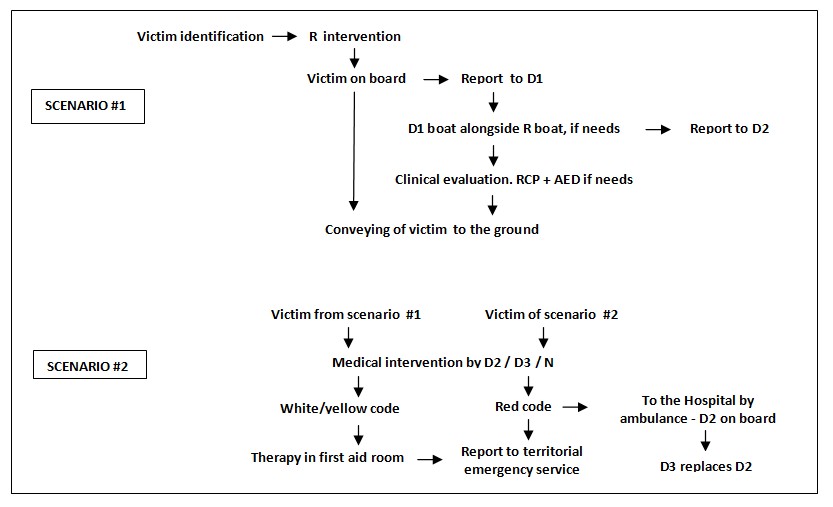 F6. Internal communications
Managing communications between emergency vehicles and the ground stations is controlled by the operational guidelines of the SP manager.
Always active communication channel between physicians, nurses and rescuers, is fundamental  in order to optimize the diagnostic and therapeutic indications and facilitate the victims transferring,  according to the established logistic pathways.

F7. External communications
It is of vital importance that all athletes and, by extension, present bystanders are informed before the event about the essential elements of the SP.  Therefore, a part from some preliminary technical meeting, two moments of public and documented communication to the athletes,  just before the race starts,  should be included in the program:

–   proper behaviour in the race

–   indications in case of needing help

–   type and identification of rescue vehicles and crafts

–   not having taken within 24 hours alcohol or drugs or narcotics

G –  CONCLUSIONS
This paper intends to be a contribution to a rational identification and thus stratification of the risks associated with sporting events represented by free-water swimming.
We believe that the scientific analysis of the various components of the races, both in water and on the ground, is fundamental to the development of a safety plan, both in terms of rescue and health care.
The variability of these components remains evident: however, according to our model, they can be specifically considered and classified.
We hope that our proposal can help tackle the risks, improve skills and, above all, concur to  a positive change in  morbidity and mortality related to this category of water sport.

TABLE I
Swimming as first sport and type of agonistic activity in Italy
ISTAT (*), 2011

Figure 1
Australian synoptic table for the risk assessment and consequencies 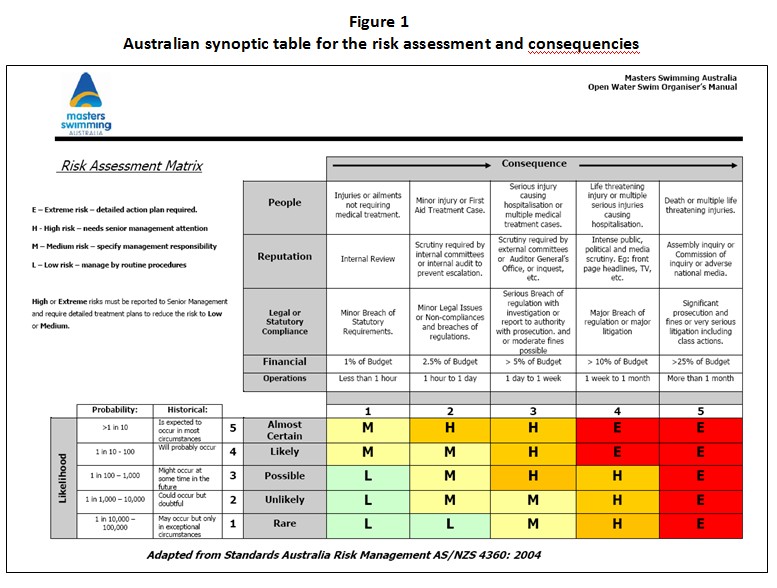